Home A All Commodity Volume (ACV)

All commodity volume (ACV) represents the total annual sales volume of retailers that can be aggregated from individual store-level up to larger geographical sets. This measure is a ratio, and so is typically measured as a percentage (or on a scale from 0 to 100).

The total dollar sales that go into ACV include the entire store inventory sales, rather than sales for a specific category of products—hence the term “all commodity volume.” ACV is best related to the key marketing concept of ”placement” (distribution). [1] 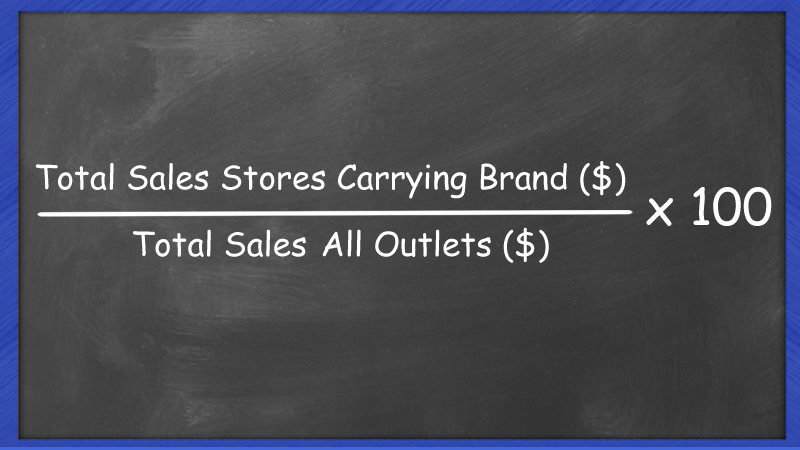 All-commodity volume measures a firm’s ability to convey a product to its customers in terms of total sales among outlets carrying the brand.

All-commodity volume (ACV) is a weighted measure of product availability, or distribution, based on total store sales. In other words, ACV is the percentage of sales in all categories that are generated by the stores that stock a given brand (again, at least one SKU of that brand). (Note: ACV can be expressed as a percentage or as a dollar value (total sales of stores carrying brand.)

This is the annual dollar sales for a geography in millions of dollars. When dividing total sales for an outlet into ACV million dollar blocks, it allows for equivalization across inherently different-sized market or retailers. A large share of sales in Des Moines may or may not be as important as having a lesser share in New York City. The open question in the above case can be resolved by dividing sales regardless of outlet into a sales rate per million dollars.

Assume in a city there are two hardware retailers.

Assuming a tool-set a company produces is only distributed in the second smaller-store chain, it is obviously represented in half the store locations (50%). However, all stores are not created equal; based on the above numbers, the tool-set would only be selling in a quarter of the total market ACV (25%).

In the converse scenario of distribution within only the big-box retailer, the tool-set would similarly be distributed in half the stores, but those stores would represent 75% total market ACV.

Given the choice, a business typically prefers its distribution in higher-volume stores for the greater sales potential. More consumers spending more total dollars occurs in these outlets, indicating more traffic and/or average spend per consumer.

Within marketing and sales circles, the percentage of stores a product sells within is less relevant than a product’s share of the store ACV value.

Based on the above logic, common applications of ACV equivalization are as follows: